George Shearing: Lullaby for the Piano

Once again a cover by someone I must admit I knew nothing about before selecting it for these purposes, but one that involves another intriguing story. It also represents another example of someone who recently passed away, in this case only about five months ago. (That seems for some reason to have happened a fair amount during the time I have been writing these pieces.) George Shearing died at the age of 91 in New York this past February, after living a life whose path saw him rise from poor, working-class roots in London to become a world-renowned jazz pianist who was knighted by Queen Elizabeth in 2007.

But first, that artwork. Birds have become sort of a trendy graphic design component in recent years, but something about the way they are used here, and the innocence of the whole thing, really transcends any of that to me. I love how they are perched on his hand and head. I don’t know if their prominence partly explains why I never noticed his closed eyes, but it never occurred to me that Shearing might be blind. He was, however (congenitally), and I think it’s somewhat admirable that they did not attempt to really downplay that by not showing his face, having him wear glasses, etc. (as he does here – on what is nevertheless another great sleeve in my opinion).

George Shearing was born in Battersea – a blue-collar section of South London – in 1919. The youngest of nine children, his father delivered coal and his mother cleaned trains at night. Just that large a family is at least a little hard for most to imagine in this day and age, but what reading about his life really made me think about was just how comparatively little there was to “do” in that era, at least for children. Shearing took up the piano at the age of three, and pondering that led me to wonder how many households must have had pianos back then, in an age of not only no TV, but not even radio for the most part (although they were beginning to appear in homes in the ’20s, and Shearing is said to have shown early musical aptitude by memorizing tunes he heard on the radio: “My family tells me that I used to listen to the old crystal set, then go to the piano and pick out the tune that I just heard.”). That left perhaps primitive phonographs if one’s family was lucky enough to own one, movies, spectator sports, and … probably a lot of time to fill by playing outside, reading or studying, and doing things like learning a musical instrument – if one wasn’t roaming the neighborhood causing trouble, of course. Though there was also no doubt in most instances a lot of work to get done each day – electricity only became affordable to middle- and working-class homes at the end of the 1920s, appliances when they existed were of course vastly more basic, and especially with a large family it must have been a bit of a daily grind in a lot of ways.

In looking into it, I found some information on piano sales, at least in the United States, which was likely pretty similar to the UK in that regard. Max Morath at pbs.org writes that “between the year 1900 and 1920, something like five million pianos were sold. And when you think that they went into homes where maybe who knows how many, 10-12-15 people, used them, it means that the piano was accessible to almost everybody in America.” Pianos of that time have been likened to the big screen TVs of today, and that goes some distance towards capturing how things have shifted to more passive uses of leisure time. But that isn’t a commentary on merely contemporary culture; that shift started to happen during the decade of the ’20s itself: an essay on the jazz age here talks about how “piano sales sagged as phonograph production rose from just 190,000 in 1923 to 5 million in 1929.” (Electronic recording had begun in 1925, and by 1927 over 100 million records were sold.) On the Wikipedia page detailing the “social history of the piano,” the instrument’s decline is described this way: “The piano’s status in the home remained secure until technology made possible the enjoyment of music in passive form. First the player piano (ca. 1900), then the home phonograph (which became common in the decade before World War I), then the radio (in the 1920s) dealt severe blows to amateur piano-playing as a form of domestic recreation. During the Great Depression of the 1930s, piano sales dropped sharply, and many manufacturers went out of business.” 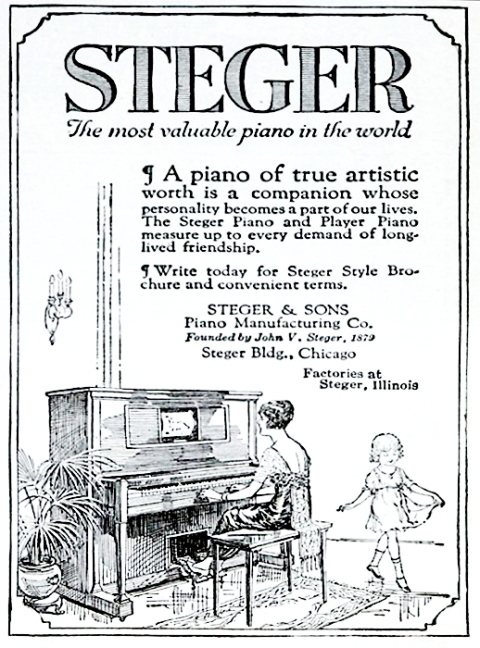 In reading further about how young people spent their leisure time in general in the early part of the 20th century, I came across a charming list that includes activities like sewing that had not occurred to me. It says that teenagers of the ’20s and ’30s spent most of their free their time with sports, playing an instrument, going for walks or to the beach, sewing, playing with dolls, drawing, and listening to music. It was also nice to see that during breaks at school, fighting was one of their pastimes.

George Shearing, in any case, started by tinkering on his own, then took lessons from a local teacher before studying at a local school for the blind in his teens. What is interesting is that after that, at age 16 and having been offered several university scholarships, he turned them down in favor of working as a solo pianist in local pubs. I don’t know if that was more out of choice or necessity; his obituary in The Examiner, though, portrayed it as the latter. “He was forced to refuse [the scholarships] in favor of a more financially productive pursuit…playing piano in a neighborhood pub for the handsome salary of $5 a week!” However, Shearing pointed out in a 1986 interview with NPR’s Terry Gross that one thing a blind musician can’t do is read music – which is something more or less required to be a studio musician. “This is not available to the blind, but playing in the pub was, and eventually getting my own group was.” That makes it seem less like he was being forced to go earn money at age 16 than that he just felt the typical path wasn’t really going to be an option for him.

Seventy-two years later, upon receiving the news that he would be knighted by Queen Elizabeth, he spoke of those times. “My mind keeps flashing back on my beginnings as pianist playing in a pub for the equivalent of $5.00 a week.  What a journey it has been from that pub to Buckingham Palace.  Receiving such an honor as a Knighthood might also show young people what can be achieved in life if one learns his craft and follows his dreams.” 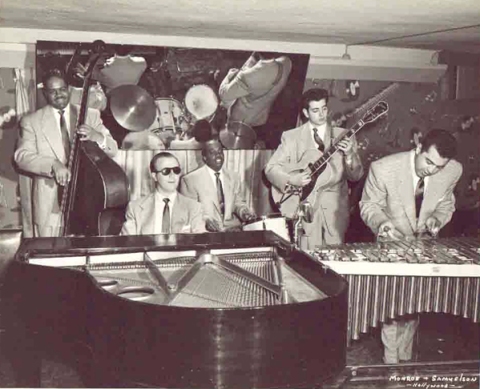 Shearing in 1952 - note the great reflection in the mirror

It wasn’t an easy jaunt to get to that point – Shearing was the first postwar British jazz musician to emigrate permanently to the U.S. and forge a successful career, moving to New York in 1947, at a time when, as The Guardian‘s obituary points out, “Shearing and his countrymen, prevented by a Musicians’ Union embargo from hearing the best American musicians in person, tended to regard these stars as supermen, wearing out their recordings, yet never imagining that it might be possible to perform alongside them in New York. However, Shearing put such negative thoughts aside and took the decision to emigrate. His success was speedy and spectacular.”

Shearing’s big hit was the title track of this collection, “Lullaby of Birdland,” which was written in 1952 about the famous New York nightspot (and reportedly in 10 minutes over a steak dinner at home – “I heard it in my head,” he said). He once introduced it at Carnegie Hall by saying, “I have been credited with writing 300 songs. Two-hundred-ninety-nine enjoyed a bumpy ride from relative obscurity to total oblivion. Here is the other one.” That reminded me of the time I saw the English pop singer-songwriter Nick Lowe do a gig many years ago, and he introduced “Cruel to Be Kind” by saying, “Here is a medley of my hit.” I do love the British sense of humor. Though it was the first time I heard it, I don’t think he originated the line, however, and funnily enough Shearing used it too.

I also love the fact that Shearing’s South London neighborhood seemed not to have forgotten him. After he died a local publication saw fit to mention that “Jean Gilmore, who grew up living opposite Sir George’s grandmother in Austin Road, said he was ‘very well known’ in the area and the entire community watched with excitement as his fame grew.” I’m sure they drank many cups of tea while exchanging news of his latest triumphs. His life was, as he himself said, a bit of a “fairy tale come true.” His father had even delivered coal to Buckingham Palace, and yet, as Shearing put it, “the poor, blind kid from Battersea became Sir George Shearing.”

Not to mention that he makes an appearance in Jack Kerouac’s On the Road, as no less than “Old God Shearing.” Here are some excerpts from the passage: “Dean and I went to see Shearing at Birdland in the midst of the long, mad weekend….Shearing came out, blind, led by the hand to his keyboard…and…began to rock; a smile broke over his ecstatic face; he began to rock in the piano seat, back and forth, slowly at first, then the beat went up, and he began rocking fast, his left foot jumped up with every beat, his neck began to rock crookedly, he brought his face down to the keys, he pushed his hair back, his combed hair dissolved, he began to sweat. The music picked up….Shearing began to play his chords; they rolled out of the piano in great rich showers, you’d think the man wouldn’t have time to line them up…[T]hese were his great 1949 days before he became cool and commercial. When he was gone Dean pointed to the empty piano seat. ‘God’s empty chair,’ he said.”

“A Blog Supreme” at NPR says that “Shearing’s vibes, guitar, bass, drums and piano quintet popularized an easier, gentler jazz. But it was never cloying or ‘smooth’ — always tasteful and musically substantial. Within the commercial conventions of the 1950s and early ’60s he was an experimenter, embracing Latin dance rhythms, working with new instrumentalists including vibists Margie Hyams and Cal Tjader [and] harmonica player and guitarist Toots Thielemans.”

He definitely led an interesting life, and if you have any inclination you can listen to the Terry Gross interview here. He talks of  playing in bomb shelters during WWII, his mother being “bombed out” three times, what prompted him to move to America and what enabled him to succeed, and discusses the tension between the commercial and the more creative strains in his music.

You are currently reading George Shearing: Lullaby for the Piano at Long Fade.